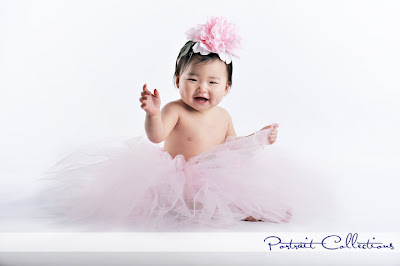 * Our little sweetie is a full fledged walker. She is walking all over and rarely crawls anymore.

* She has added a new word to her vocabulary. Along with Mama and more (pronounced "eeemmmmm" or "mom") she now says "hi"... and it is totally cute too because she opens her mouth really big at the "hhhhh" part. :)

* She has four teeth... two on top and two on bottom. The teeth on either side of her top teeth are just breaking through.

* We have started some sign language. She hasn't really picked it up yet be I keep trying. One time I think that she was trying to sign "more" by clapping... the actual sign does look similar... either that or she was just clapping because she loves food. :)

* She is giving more hugs than ever. I finally received my first unsolicited hug this past month. She walked up and just hugged me for no reason. Tears!

* She says "Aaaaawwwww" when she hugs.

* She has a love hate relationship with bathing. Sometimes she LOVES it and plays and laughs and splashes... other times she screams like someone is stabbing her. It's always a surprise... I never know which way it's going to go.

* She started drinking from a sippy cup. She usually spits out anything that isn't water... which is really fun.

* She still LOVES LOVES LOVES food like no other child I have known. There are very few things that she won't eat.

* She has a temper.... ooooooh that temper. It's kind of like ying and yang.... she is so happy and smiley and joyful... but can also be fiercely angry and stubborn and short fused. There is VERY little middle ground with her. Either she is super happy or super pissed... like a switch. She really doesn't whine or fuss... she skips that and goes straight for full on tantrum. Good times.

* She seems to like Mickey Mouse Playhouse and dances when the theme song comes on.

* She loves the remote and when she finally gets her hands on it she pushes the buttons and then looks at the TV over and over. She is so smart!

* She still sleeps really well... about 11 hours at night and a 2 hour nap during the day.

* Luca is still her favorite. She is so drawn to him and wants to hug him all the time. He isn't always in the mood for hugging though. :(

* If the dog is barking I will sometimes yell out for him to be quiet. Eden will join right in and yell some gibberish. It is so cute.

* She will sing! If you sing "laaaaaaaaaa" she will join in. Adorable.

* She still loves loves loves attention. She is a people person for sure! She is just so very social. In reading some information about Eden's biological mother it was noted that she was also very social. I like to think that maybe Eden got that from her.

* She loves her pink car that she got for her birthday! It's the kind they ride in and has a nice handle for someone to push while walking. She will ride in that much longer than her stroller.

* She is NOT a hockey fan. The days of sitting on my lap during games are over. This is bad.

* Her hair is growing like crazy. It is hard to believe that just three months ago it just reached her hairline. Now I'm able to do pigtails and a crazy pony on top that sticks up.

Time seems to be going by so quickly. I can't believe how much she has changed in these last few months. She continues to just amaze me in so many ways... her intelligence, her beauty, her loving nature, her strength, her love of life. I am the luckiest mom in the world.

Pics from her Dol party coming soon!
Posted by Our Journey To Eden at 3:00 PM

so fun getting to know Eden! can't wait to see her dol pictures. :)

Smart, funny, silly and so sweet...that's our girl! So happy she is part of my world.
Nonna

Wow, she seems like she has even changed so much since her first Birthday party! She is such a joy, we love her and can't wait to see her soon!!