Another Step Forward in Attachment

Yesterday I had an appointment after work but needed to stop home real quick before leaving for my appointment. My in-laws were in town and were watching Eden. When I walked in I was greeted with a screaming, running, smiling, sweet hello. She was so happy to see me. :) I gave her a quick hug and then turned to leave. Well... then the tears came. "Maaamaaaaa... Maaaamaaaaa!" This was a first! I thought that maybe it was a fluke... but then this morning she cried for me again as I left for work. Same sad, "Mama"... with real crocodile tears.

Although I really hate leaving her upset (she calmed down with her favorite distraction... food) and it breaks my heart to leave her.... I can't help but smile. See... up until now she hasn't shown a real preference towards me. She seems to tolerate me and seems to like me alright... but nothing more than that. She let me into hear world, but not into her heart. I felt like she knew I would meet her needs and was a comfort to her, but if I left tomorrow she wouldn't really care. I was replaceable. She never put up a fuss when I have had to leave her before. Although she is happy to see me, my "hellos" pale in comparison to the ones she gives to Daddy. There were even days when I would get home from work and she would grab my mom's leg and cry because I was home. Talk about rejection. It's been tough. For a while I felt like a servant.. feed me, clothe me, comfort me, get me what I want. All the while I keep waiting for something. Some little sign that I have have broken through and have entered her heart... that she didn't just want someone to be with her... but that she wanted ME to be with her.. that I have something that no one else has... that she has set me apart. I know it is selfish.. after all she has been though... focusing on my need to feel "special." I wonder how long it would take me to love again if everyone and everything I have ever loved and known was taken from me. She has done remarkably well, considering.

Honestly, what makes me even happiest is knowing that she feels confident and safe enough to let me in a little bit... to start to love me.
Posted by Our Journey To Eden at 10:05 AM 12 comments: 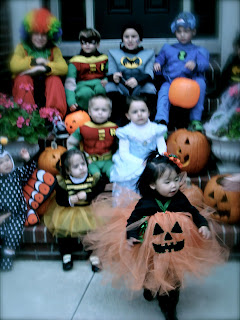 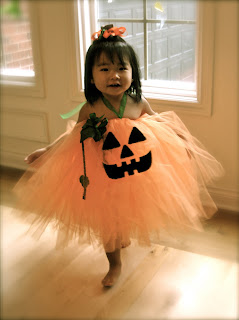 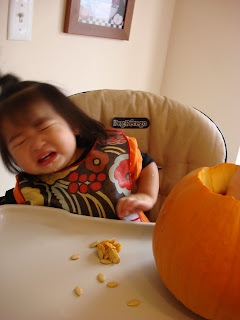 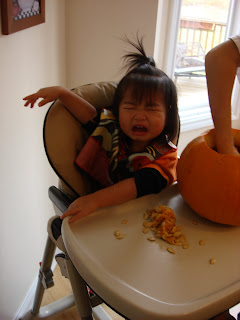 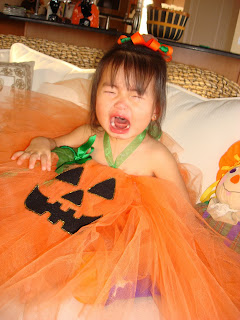 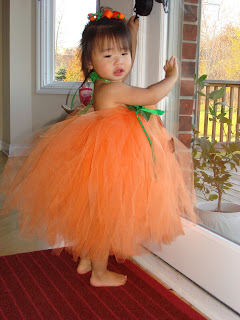 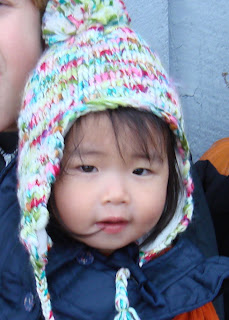 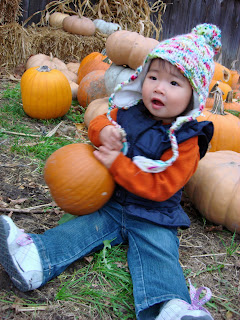 Eden celebrated her first Halloween this past month. It took me quite some time to find the perfect costume... a strawberry, Little Red Riding Hood, Minnie Mouse... but I ended up finding the cutest pumpkin costume on Etsy! I have to say she looked adorable!!! She really seemed to like her costume too! Other than that... Halloween was a bust. She really disliked the whole pumpkin carving bit... she actually was spitting and gagging when we cut it open. She didn't seem to care for the smell and wouldn't touch the seeds/guts. Eden is going through a phase where she hates having he picture taken. She will be fine and the minute to take the camera out she will start to throw a fit! Sooo it took forever to get a decent picture of her in her costume. I needed LOTS of distractions! Plus she is so very busy that it is difficult for her to hold still long enough to even take a picture. Thanks to Uncle Jay I did manage to get one good one! She didn't get into trick or treating... not that I figured a 19 month old would. She just wanted to pull the wagon. I am curious to see if Christmas will be more her speed. 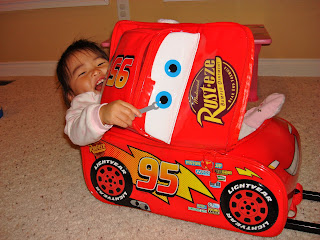 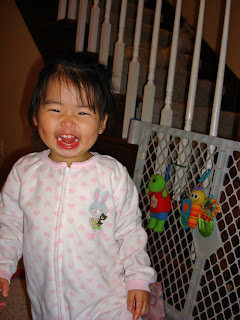 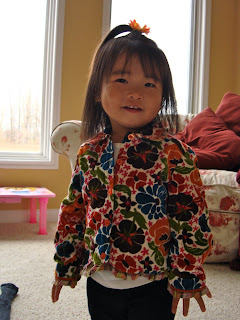 * She continues to be a super funny kid! I can't help but laugh when she crinkles her nose up and smiles.

* She still loves to be chased and will screech and scream but then runs into your arms instead of away from you.

* She LOVES Adrian. She asks for him all the time. If she doesn't know where he is she will say, "A-den ho-keee." She must have figured out that if Adrian is not home, chances are he is at hockey.

* She has a great sense of direction. She will start calling out, "Nonna, Papa" when we pull into my parents subdivision. She will also say "hockey" when we pull into the rink. She really freaked me out though when we were driving and were stopped at an intersection near my sister's house. She started saying, "Tee Tee" and pointing in the direction where we would need to turn to get to her subdivision. 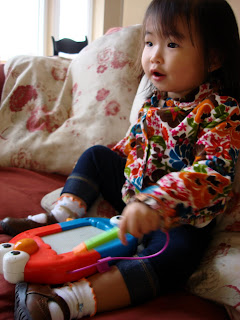 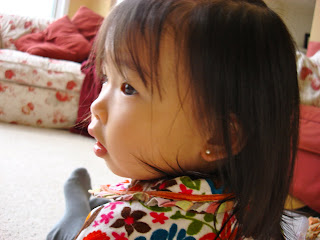 * She is starting to put two words together... Mama All Done (I guess that is three!), Mia Night Night (three again) 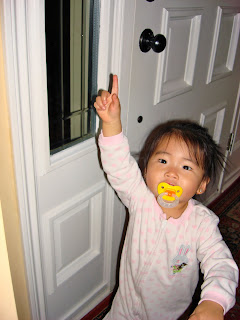 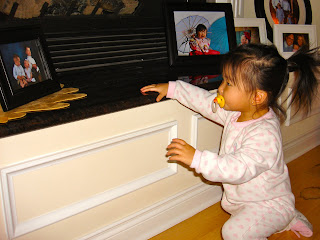 * She LOVES her BFF and cousin Mia. She asks for her daily. She will go to her picture and say, "Mia" and then run to the front door and reach to open it. It's her way of saying that she wants to go to Mia's house.

* She hates to have her hair done or nails trimmed and will throw a giant fit when either needs to be done.

* She loves raspberries with a passion. 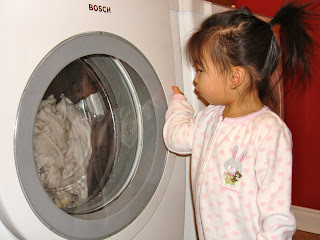 * She loves to "help" me do laundry. She will help put the clothes into our out of the washer and dryer. Her favorite part though is shutting the big door.

* She is in a scratching phase. She actually drew blood on a child at church last week. She will grab and dig her nails into faces. Nice. She will do this if someone has a toy she wants or if another child looks interested in a toy she has. Sometimes though she will just do it for no reason at all. I hope this phase passes quickly. 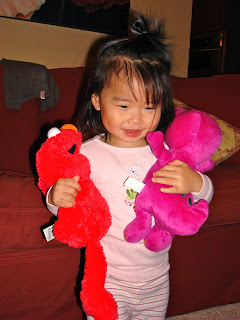 Eden has been home with us for ten months and the days are just flying by. I can't believe how much she has changed when looking at pictures of when we first brought her home. It seems that time seems to move 15 times more slowly when you are waiting to bring your child home. Once your child is finally home time seems to move 15 times more quickly!

We are so blessed and honored to have this beautiful child as our daughter. She is more than I ever dreamed.
Posted by Our Journey To Eden at 8:03 PM 10 comments:

Creation Groans from Christian Alliance for Orphans on Vimeo.

When I was a little girl, if you would have asked me how many children I would have one day, I would have said five. I most likely would have told you that I was going to adopt a Chinese baby too. No joke. Not sure exactly where that came from. Honestly, part of it came from my fear of childbirth... and probably because I have always thought that Asian people are so beautiful. I remember wishing I had Asian hair and Asian eyes.

Things sort of worked out the way my ten year old mind envisioned. Instead of "Chinese" we have a Korean born daughter. Instead of five kids... we have three. Three is a lot. No doubt about it. I can't imagine having five... or four. Not while working anyway. I know people do it, but I know that for me personally I can't take on one. more. thing.

But then... I see a face. A face of a child waiting for a family.

...and then I wonder... does my heart, my home, my leave from work, my schedule, my wallet, my children, my piece of mind, my husband... have room for one more? A mixed bag. Some resounding YES's and some HUGE no's.

It's hard to be in the adoption arena and know what I know and see what I see and not feel like... I should be doing more. Scratch that... I WANT to do more.

Some faces haunt me and I will have to check over and over again to see if anyone has stepped forward to adopt them. Many of the children on these lists have special needs. Some are severe but many are not. Some are on lists because of age alone.

This child has been waiting on the Rainbowkids site for a year. 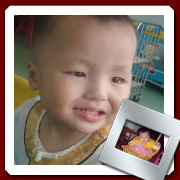 These two cute guys are likely still waiting because they are boys, over the age of 2, and have some malformations of their fingers and/or toes. I have had students who have had missing fingers and never once did it stop them from doing anything. This is such a minor need. Yet they wait.

... and there is this sweet girl 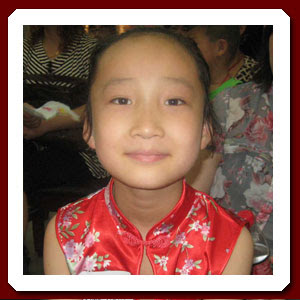 Although I have not read her full file... her "special need" is so minor. It doesn't appear that she will need future surgeries or therapies or medication. Her age is likely the reason why she is still waiting. I just want to reach out and cup that sweet face in my hands.

There are hundreds and hundreds more children on these lists... from all different countries... all deserving of a family.

I know that there will always be "that face" that calls to me. Even if I adopted 100 kids... I know that my heart would always want do adopt more. For now, I need to focus on the three little faces that greet me each morning. I need to love them, teach them, tuck them in to bed at night... and I am blessed beyond measure. So, I will do what little I can for these waiting children... advocate for them, pray for them, and encourage families out there to learn more.

If you are interested in learning more about these waiting children the following website has many links to photo listings. But be forewarned... you may see the face of a child that will steal your heart.

Come Unity
Posted by Our Journey To Eden at 5:04 PM 1 comment:

ADOPTION AWARENESS MONTH. I am going to *try* and do some posts about adoption in support. This blog really has suffered since Eden has come home. I am now a working mother of three active kids. There isn't a whole lot of time to spare. Most days I feel like I am barely keeping my head above water. My house is never clean, there are always piles of laundry to be done, and I can count on one had the number of days per month that we don't have something planned for after school. Hockey practices (for two kids), hockey games (for two kids), drum lessons, church group meetings for the kids, church volunteer days for me, doctor appointments, work meetings... ughhhhhhhhhhhhhhhhhhhh. Most of it is all good... just busy.

I have thought several several several times about ending the blog. I don't think that there are very many readers anyway. ... but then I will get an email (like I did today) from someone I never met telling me how reading this neglected and poorly written blog (my opinion) has somehow helped them. Whether it be using our agency, changing countries, encouraging them during the wait or deciding on adopting... this blog has helped someone. For that reason... I will continue.

First up for adoption awareness month... a video created by a adoptive family. This family frequents a Korea adoptions forum that I am a member of. They collected pictures from other members and made this video. Eden is not in the video as I never had the 10 minutes it would have taken to send in a picture. Enjoy!!!!