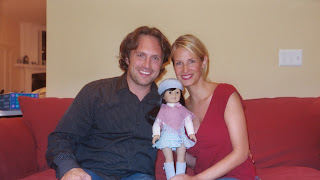 Two years ago today we officially began our adoption. I remember the overwhelming excitement while filling out the very first application. We had been researching countries and agencies for a while and waiting for the timing to be right before taking that first step. We were building a home to sell at the time. I had been waiting weeks for things to be financially in order and it was driving me crazy. Finally, one night after dinner Ron surprised me with a large gift. It turned out to be an Asian American Girl doll. That was his way of saying that the time was right. Of course I burst into tears! What made it even better was that he purchased an outfit with the doll and she was wearing it. It was a "traveler" outfit complete with suitcase. I kept picturing him dressing the doll, brushing her hair, putting the shoes and hat on... so sweet. It was one of the best days of my life.

It is neat to think that when this is all said and done and Eden is home with us, that this adoption... this whole process beginning to end... will be sandwiched between two of the most happiest days of my life... the one that took place two years ago... and the day we receive our most precious gift... our daughter.
Posted by Our Journey To Eden at 6:02 PM

What a lovely post, thanks for sharing. Keep the light burning and never look back...mom

My heart is with you my friend. You will get there... I am praying that you will not have to wait as long as we will, that things will slowly pick up and get back to where they were 3 years ago...

Your mom has great advise, never look back, this journey was meant to be.