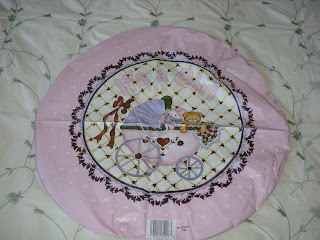 Early in our adoption I had sent away for information from a variety of adoption agencies. Ron and I were in the early stages of talking about adopting and at the time I just wasn't sure if it were actually going to happen. I felt so drawn to adopting, like I was being pulled in a direction which I had no control. I can't really explain it. I just knew it was somthing I was supposed to do.. and desperatly wanted. Like many families we had concerns about finances and adopting in general. I have heard from countless adoptive famlies that there were "signs" along the way that let them know that they were on the right path. I have had many signs but the first one came the day I finally recieved my first agency informatin pack in the mail. I went out to the mailbox and my heart leapt when I saw the large envelope waiting for me. As I was walking back to my front door I noticed somthing blowing around near my garage. Thinking it was garbage I stopped to pick it up. You can imagine my surprise when I saw that the "garbage" was a deflated helium balloon with the words "It's A Girl" printed on it. I think that is about as close to God actually speaking to someone as you can get. Amazing, just amazing.
Posted by Our Journey To Eden at 6:32 PM

Oh.My.GOSH. That is the best "sign" Ive read about yet!
I can't view the pic for some reason though (?)

You never told me this wonderful story. I guess (rather I know) the Man upstairs is leading the way - keep the faith, she will be here soon.
Nonna