Wow! There has been sooo much going on.... all good thing too... and I have not had a chance to sit and post any of it!!! Life is keeping me busy right now with the end of the school year, a new puppy, two active children, travel, and lots of birthdays.

We celebrated our 1 year log in anniversary on the 16th. We invited family over to celebrate with us. It was such a fun day! I made everyone sign our journal for Eden. What beautiful messages everyone wrote to her! My mom and dad gave us an adorable frame. So pretty... one day it will hold her picture. One whole year... wow. In so many respects it has flown by. I feel like a good amount of our wait is behind us.... I know we still have lots of waiting ahead but it is good to know that at least we are one year closer. 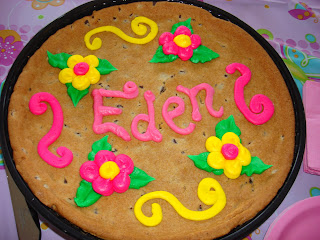 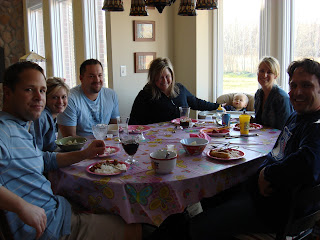 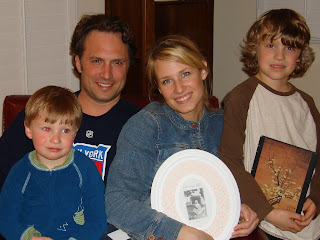 The next day Ron and I left for Chicago with our friends Lynn and Jim. Our adoption agency organizes an adoption conference twice per year. The conference is called East Meets West and provides adoptive parents with a wealth of information ranging from attachment, health issues, basic Mandarin, travel, etc. We arrived in Chicago a few days early to enjoy the beautiful city.

Our first night we took the train from our hotel to Chinatown. Wow... what a neat place. We went into all the little shops crammed with all things China. We also went into a grocery type market store. Upon entering there was a cut of fish laying out on the table and a few buckets with who knows what inside them.... I should have taken a picture!!!!! The smell was like nothing I have ever experienced. The smell was like a fog around the whole store building. The buildings were all asian style and the signs were written in Manderin and English. The store workers were all speaking Manderin which was neat. I found an adorable Hello Kitty chopstick/utensil set for Eden and got the boys some asian candy. It was just really cool to experience some of the sights, sounds, and smells :( we may experience in China. 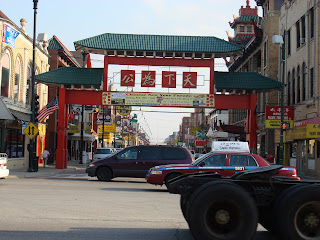 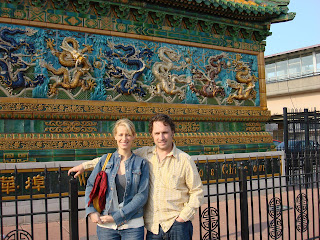 We ate Penang per a recommendation from a friend of Jim's. At first we were all a bit nervous when looking at the menu... not a whole lot on it that sounded good. The food was Malaysian/Indian/Chinese. Finally we all found something we thought we might like and ordered. We could hardly understand our waitress but she was so cute and so sweet! Our food was surprisingly DELICIOUS! My favorite was the Indian pancake bread... soooo yummy!

The next day we were off to do some shopping. Our first stop was the American Girl store. Eden has an American Girl. Ron bought her one when we started the paper chase. I have never been in the actual store though. All I can say it that I can't wait to bring my Eden there!!!! What fun! There was all these little girls walking around with their moms and their dolls. There is a doll beauty shop, a restaurant, a theater, a historical area, and also a main area where they sell all the dolls, clothing, and accessories. I bought Eden the dog Coconut and a doll stand. Coconut is a white West Highland Terrier (just like our Hero!). We hit a few more shops and stopped for lunch at my FAVORITE restaurant... The Cheesecake Factory. Oh, so yummy! Lynn described it as "very Willie Wonka" and as usual our food was soooo good. We then hit another section of downtown which has a bunch of boutiques. I got Eden some cute shoes and somehow resisted getting her anything more. We were pooped by the time we got back to the hotel. We decided to go to Gibson's for dinner as it was right next to our hotel. This place was CRAZY! The portions were out of control. We were laughing so hard when they brought the food out but somehow managed to eat just about every bite!!! The best was my chocolate moose pie that was bigger than anything I have ever ordered! We even shared it with the man sitting next to us! Good friends, good food, shopping, and lots of laughs... what a day!!!! Oh... and there was a earthquake too!!!!!! 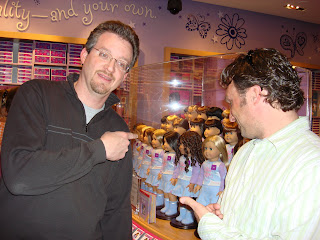 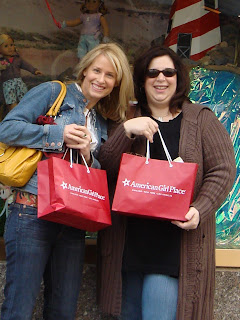 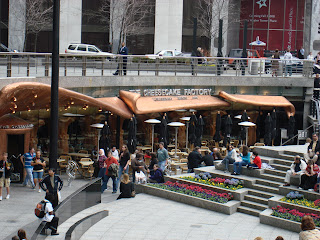 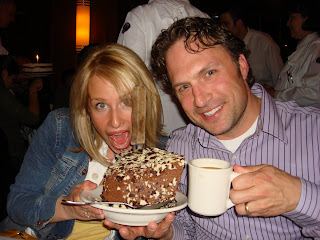 We rolled ourselves out of bed and headed down to the conference which was being held right at our hotel. I was so excited!! The first speaker was a doctor who specializes in international adoption and medicine. He had some interesting statistics and information about the health risks associated with children who are adopted internationally. Next, we attended a session on the history of China adoption. This session was lead by our agency's director Snow Wu. I have heard wonderful things about her and was really looking forward to hearing from her. Wow. I was so impressed by her straightforward, direct, honest answers to questions. I had anticipated her wanting to dance around the whole "wait time" issue but she did no such thing. She gave what facts she had and also some personal opinions. It was good to hear some of the things being done to help with the growing wait. Orphanages that have not participated in international adoption before are starting to send paperwork, babies are being referred at a very young age (show that their paperwork is being sent quickly), orphanages are bring trained in how to complete paperwork and send files for children to be adopted overseas, and we were told that CCAA is trying to find a way for children who are orphans but being raised by neighbors or family members to be part of the international adoption program. She also gave numbers as to how many dossiers are being pulled each month because families have pulled out of the program. She also clearly stated that because CCAA has no idea how many files they will be receiving each month nor do they know how many children will be abandoned each month/year... there is no way for them to give a timeline. We also attended sessions on "The Waiting Game", travel, and gotcha day. We listened to a speaker during lunch who recently took her two daughters (now preteen) back to China for a heritage trip. The day ended with a speaker form the Chinese Consulate and a orphanage director. Both I am so honored to have heard. The orphanage director brought along a video showing what life at her orphanage is like. It was really neat to get a glimpse inside. There was more shopping to be done at the conference too! I ended up buying a couple of Mandy and Pandy books with puppets (which Luca has been loving) as well as the DVD documentary about the heritage trip the lunch speaker talked about. It was just a great day and so much fun to really focus on Eden and our adoption. 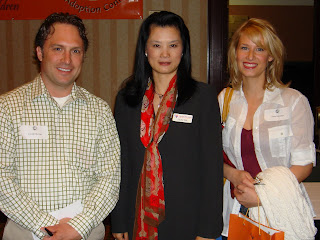 We also took in a way cool blues band and some Chicago style pizza. I only gained a pound which is a miracle!
Posted by Our Journey To Eden at 5:20 PM

Looks like the EMW conference was a big hit! I think Dan and I will have to consider going to the next one. I am glad you felt good about the comments that Snow made...I was curious how she would address the growing wait too. And...congrats on your 1 year Anniversary!!

Congrats on your 1-year LID anniversary. EMW was a lot of fun. We learned a lot. It was great to finally meet you at it. We will post photos of our little guy when we can (the agency requested we post nothing until we receive our PA).
Take care,

Amiee,you look like a model:)-tall and beautiful-:)
What a beautiful family!!!EDEN will be so happy and sooo lucky to have you...and you will be lucky to have her.God bless...

We are so glad to hear that you had a nice time at the conference and got some valuable information. I would love to see the video and chat more about what you have heard. Of course, I can't wait to see all the things you picked up for Eden.

Congrats on the one year wait. We love you and pray that Eden will be with us soon.

I'm happy to hear such positive comments on your trip and conference.
Nonna