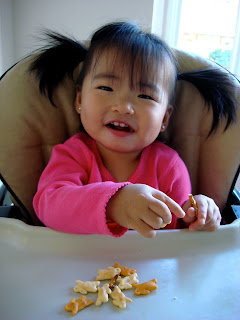 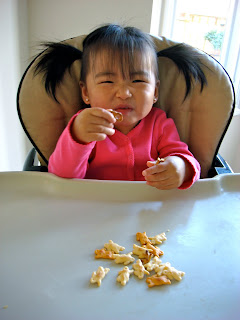 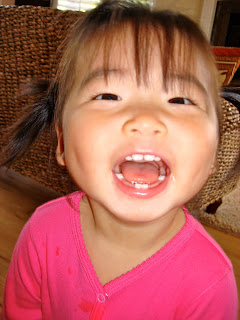 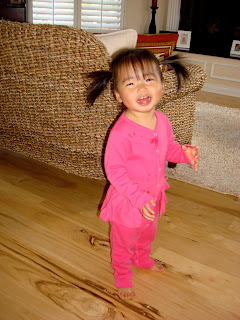 Our sweet, smart, beautiful girl is seventeen months old today. She is a ball of energy, funny, and way to bright for her own good. She can be trouble with a capital T... going from one "no no" to another... like she has a radar for things she is not supposed to do. She has the BEST smile in the world and nothing on the Earth feels better than her little arms wrapped around you. Here's more....

* She is just too dang smart and determined. Her goal each and every day is to find a way to escape from her play area. Mind you.... it is our entire family room. The room is basically her play room.... just a couch, chair, TV and about a million toys. She has the run of the place. There are several large gates blocking the three entrances into the room (darn open floor plan) to keep her in a safe area in the house. Well, from the moment she is in the room she is looking for a way out... and she has found several. One is to just ram her way out with all of her body weight and strength. This will bust open one of the sides. I now have to wedge a chair into that corner to keep it from happening. She will also slowly move her entire toy bin out of the way and fit through a tiny not humanly possible opening between the gate and stairs. My personal favorite though is that she will drag her chair over to the side of the gate and stand on it and try to climb over. I couldn't believe it when I saw her do this!!!! Without the chair she will find other things go drag and stand on. It's nuts. One day I set her in the family room and ran upstairs to put some clothes away. I am upstairs in her bedroom and the next thing I know... I turn around and she is standing right behind me... smiling of course. She broke out, went all the way up the steps (alone!), and found me. Scary.
Here she is caught in the act... 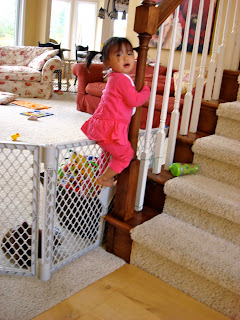 * She makes the same noise for all animal sounds. She growls. So if she sees a bird, dog, fish... whatever... she says, "grrrrrr".... so funny. Our chiropractor has a full size spine model in his office which she thinks is an animal because she growls at it whenever we are there. :) 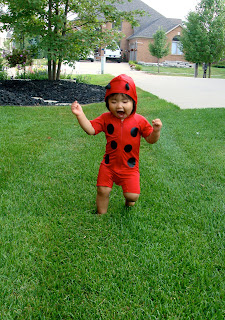 * She is repeating everything now and learning lots of new words. She knows when we say, "Say....." that she is to repeat the word. It is so cute. Some new words are... apple, please, cracker, up, Hero (our dog), outside 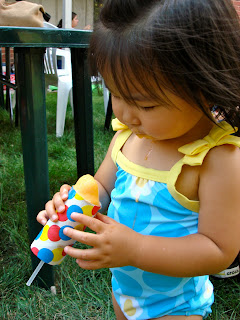 * She now waves to everyone as I bring her upstairs for bed or nap. It is so cute.

* She gave her first kiss!!!!! It wasn't for me and in fact she hasn't kissed me ever... but it couldn't have been sweeter. My sister's daughter Mia was over. Mia is six months younger than Eden. She got so excited to see her that she ran over and started hugging her. Then, she pulled back, puckered up, and kissed her right on the lips! It was so adorable! Up until that point I had no idea she even knew how to kiss. Sure.. she gets kissed about a thousand times a day... but she had never given one.

* She still loves Barney and really likes Mickey Mouse. She says "Baaaaneeee" and will sing "I llllaaaaaaaa" for the "I Love You, You Love Me" Barney song. She will say "Meee Mooouuuu" for Mickey Mouse. It is adorable. 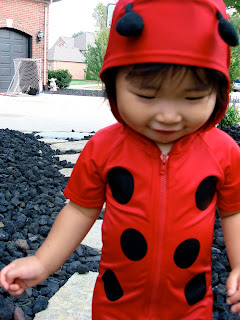 * She understands just about everything you tell her. If you tell her that we are going bye bye, she will run to the front door, try to put on her shoes, and pound on the front door. She usually adds, "Ouuusiiiii" while doing so.

* She attracts a ton of attention. People are always stopping to talk to her and complementing on how cute she is. I am amazed at how many people stop us who have adopted or know someone who has.

* We received her new birth certificate. It lists her birthplace as Korea but lists us as her parents. 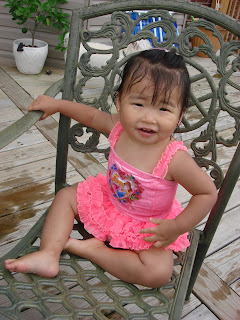 * She is still a screamer but less often. I think she is catching on that she doesn't get what she wants when she screams.

* She is still better with bath time. She is not crazy about getting water on her head.. but overall she is much better with it than a few months ago. 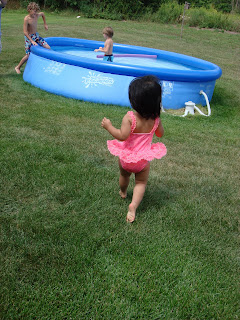 * She thinks that she can do whatever the boys are doing... which is hilarious and scary at the same time. She wants to play what they are playing, go where they are going... and when she can't... look out!!!!! She gets mad. 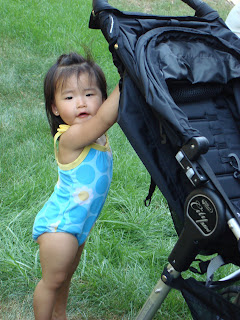 * She is still a great sleeper. She hardly ever protests going to bed.

* She has been home with us eight months now. This is the longest she has lived in one place in her life. 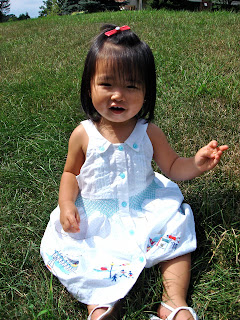 She is full of happiness and joy. You can't help but feel it when you are around her. She makes me laugh all the time. I continue to be in awe of her beautiful face. Ron thinks she is the most beautiful baby in the world and is always saying, "just look at her" and stares in amazement. He thinks she should be on posters and agency advertisements for adoptions... "If she were on the advertisements, there wouldn't be any babies without families." I love that.

With all of her beauty, it is hard to imagine her being anything but a perfect little angel. We know better. This girl is trouble. She reminds me of the Elvis song...

She's sure a beauty !!!!! Always surprised at how smart she. Love that girl,
Papa Tom

she is growing up TOO fast!!! i can't believe it! and i LOVE those pigtails!

Such a great post. After watching her this week I agree with you on all points.....but we would not change a thing.
Nonna

she really is beautiful and she sure sounds like a lot of fun too.

She is so precious. She is so full of life!! So glad to see the updates pictures. Blessings.

She is a doll!! I had to laugh though, b/c my mom says the "devil in disguise" applies to Cooper!!! How can these babies be SO cute & into SO much trouble!! But we wouldn't know what to do without them!!!